After I published Dockerized build environments for C/C++ projects, I was approached on a few occasions, both online and offline, with questions regarding my IDE/text editor setup.

While IDEs and text editors provide different features, the most important, from my point of view, are syntax highlighting, auto-completion, and code navigation. Since a single software usually provides all three, I will call it just auto-completion. I prefer to do things like building and debugging directly from the terminal; I will discuss performing these functions via VS Code later in the post.

Auto-completion is probably one of the most important things a modern IDE or text editor may provide. There are several types of autocompletion mechanisms: some are more accurate but robust, while others are more precise but require more fine-tuning.

Since the accuracy of autocompletion is extremely important to me, I always prefer using compiler-based tools.

The most prominent example of a compiler-based autocompletion parser for C++ is clangd; it is based on the Clang C++ compiler and part of the LLVM project. Once the clangd server is launched, it looks for a file compile_commands.json, which contains a list of files in the project together with the compiler flags. To instruct CMake to generate this file, add the following to the top-level CMakeLists.txt file:

For information about other build systems and customized configurations, please refer to the official documentation.

Usually, I add a symlink to this file from the top-level folder in the source tree:

For the example from Dockerized build environments for C/C++ projects, the generated compile_commands.json looks like the following:

The JSON contains three entries per each file:

Note that all the paths are absolute, meaning that clangd has to run on the same filesystem as the build system. This becomes a problem when building in docker: the clangd server runs on the host while the absolute path to source files and “includes” is found in the docker container’s filesystem. We will come back to this point later on.

After the file is loaded, the server parses each file, builds its AST, collects metadata about variables and functions usage, #defines and #if-defs related to this file and others, and stores it in the .cache folder. Note that this folder is created in the same directory where compile_commands.json is located. The parsed data is stored per cpp file in a *.idx format:

Fortunately, clangd watches the files and updates the index in the background.

The first time I used Clangd was via an amazing Vim plugin YouCompleteMe. Later, I switched to Neovim and continued using clangd as an LSP server. A few months ago, I switched to VS Code with the VSCode Neovim plugin. I confess I am addicted to Vim shortcuts.

To enable clangd in VS Code, we first need to install the official LLVM extension. Once installed, you will be prompted to install the latest clangd server, which is strongly suggested. While the setup thus far would be enough for natively built projects, dockerized builds would require an extra step.

VS Code with Docker Support

VS Code provides Docker support via the Remote - Containers extension. A Docker container can be used as a full-featured development environment, where any folder can be opened inside (or mounted into) a container and Visual Studio Code’s complete suite of features are at the user’s disposal. A file .devcontainer.json in the project’s top-level directory tells VS Code to re-load it in a Docker container. For our example project, it will look like the following:

After the Docker extension is installed and the .devcontainer.json file is placed in the repository, VS Code proposes to re-open the project in the container: 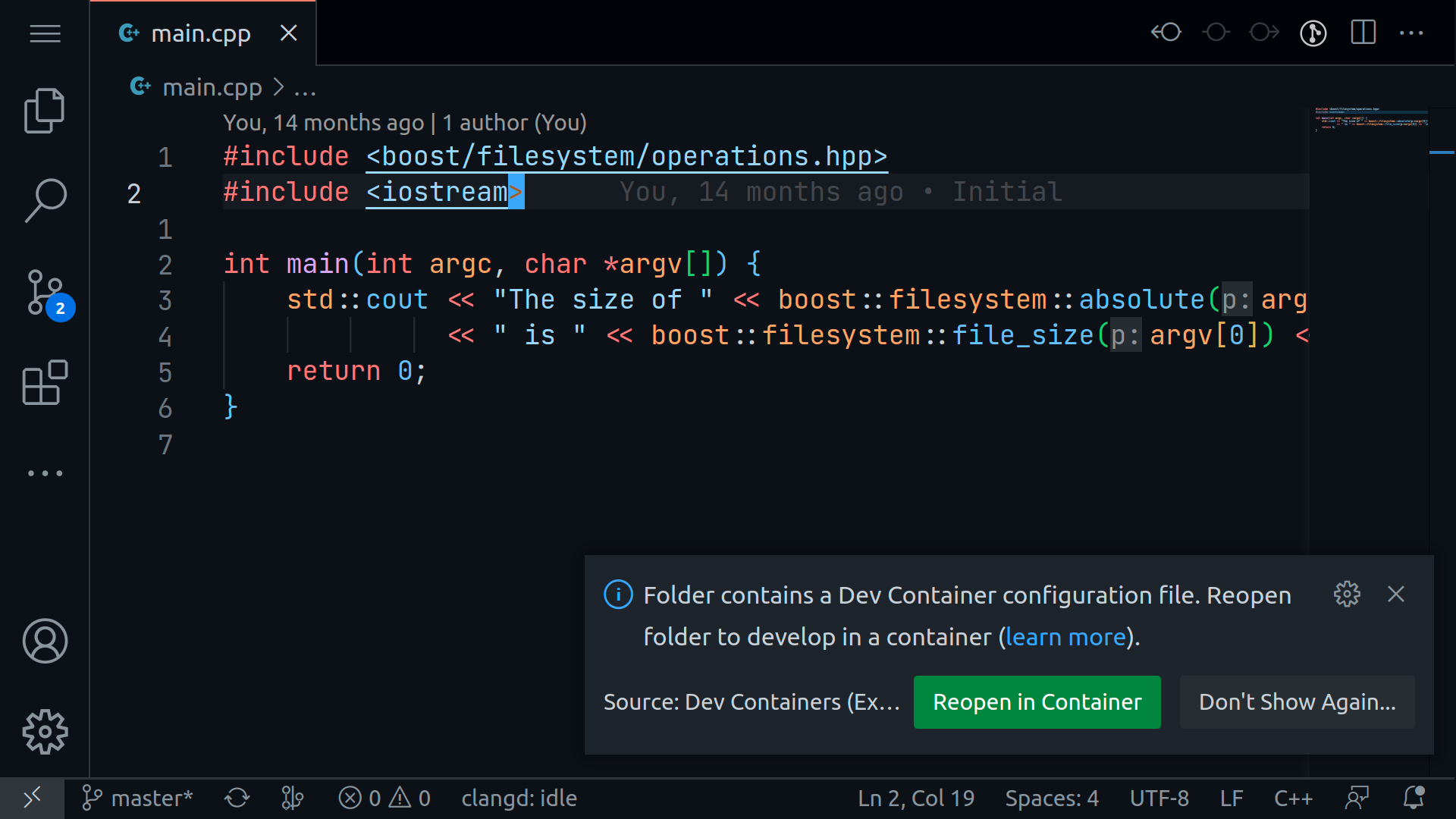 Once the user agrees, VS Code launches a Docker container based on the "image" and adds the extensions specified in "extensions". Since the base image does not contain clangd, VS Code will ask to install it; it is strongly recommended to proceed. 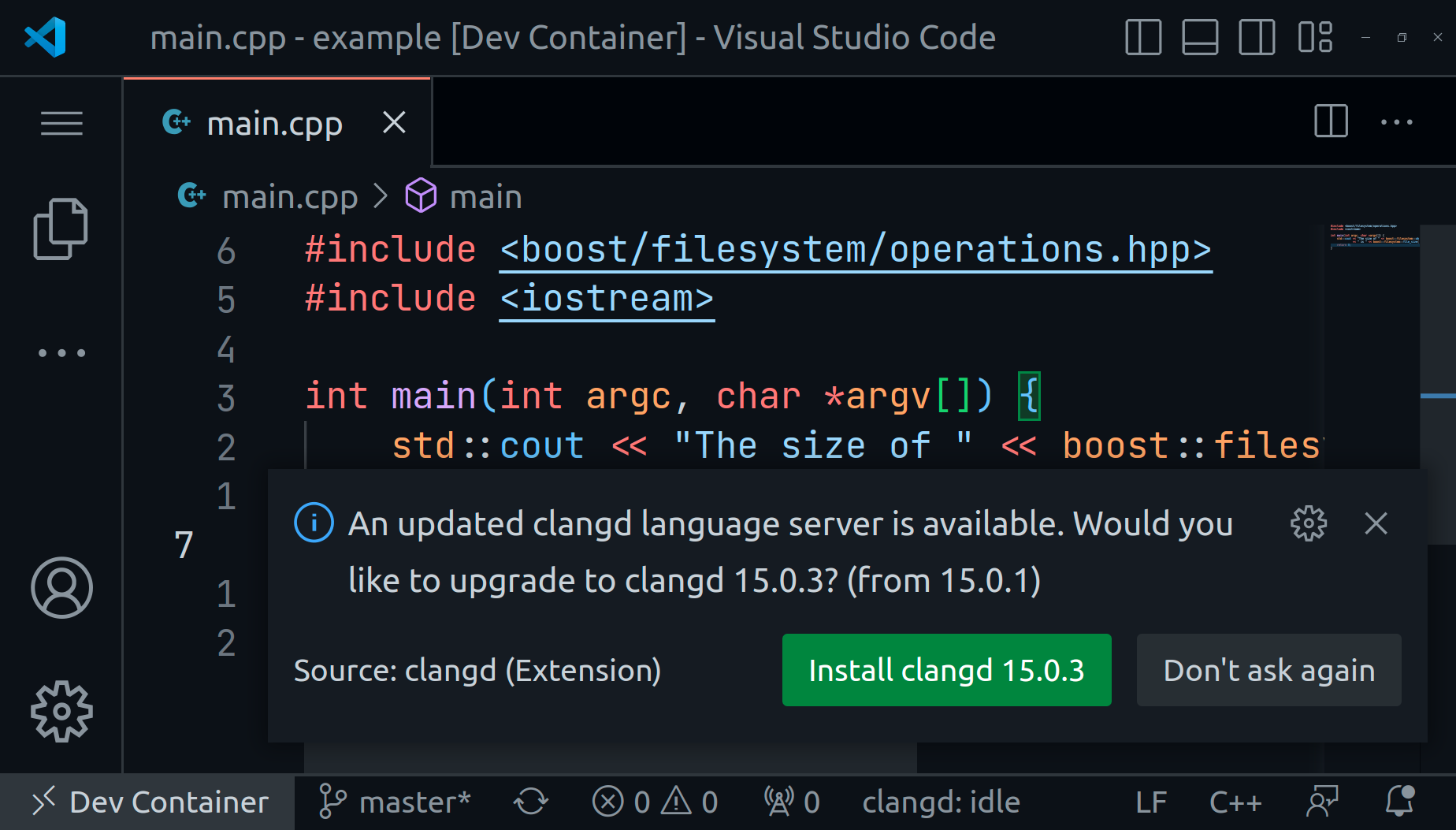 Once installed and reloaded, VS Code launches the clangd server, which can be confirmed by checking the source tree for the .cache directory with the index database, and the auto-completion works like a charm.

Additionally, clangd provides error and warning messages based on compiler diagnostics and clang-tidy configuration (if it exists): 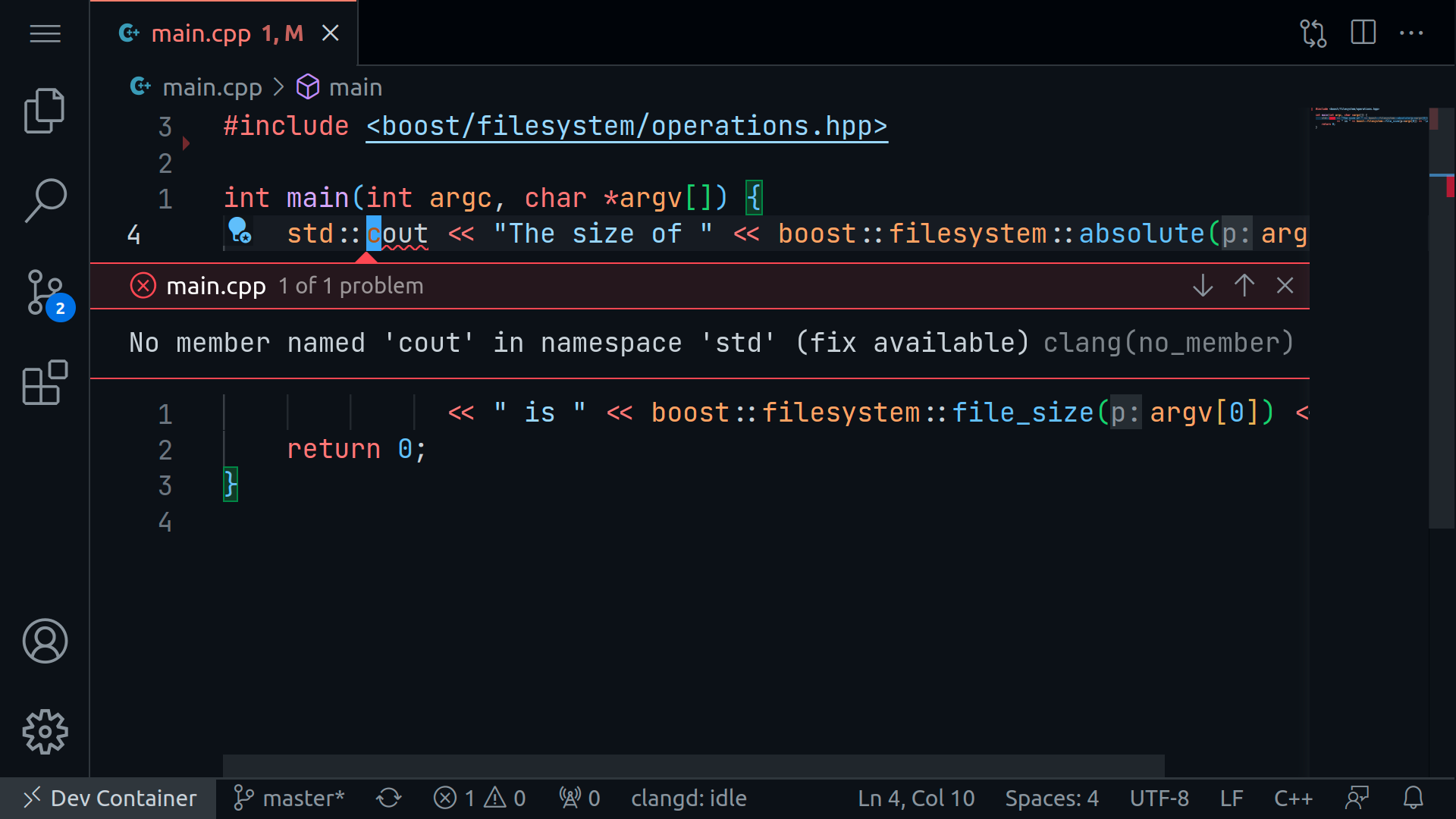 It also provides fix suggestions for cases when the compiler can help: 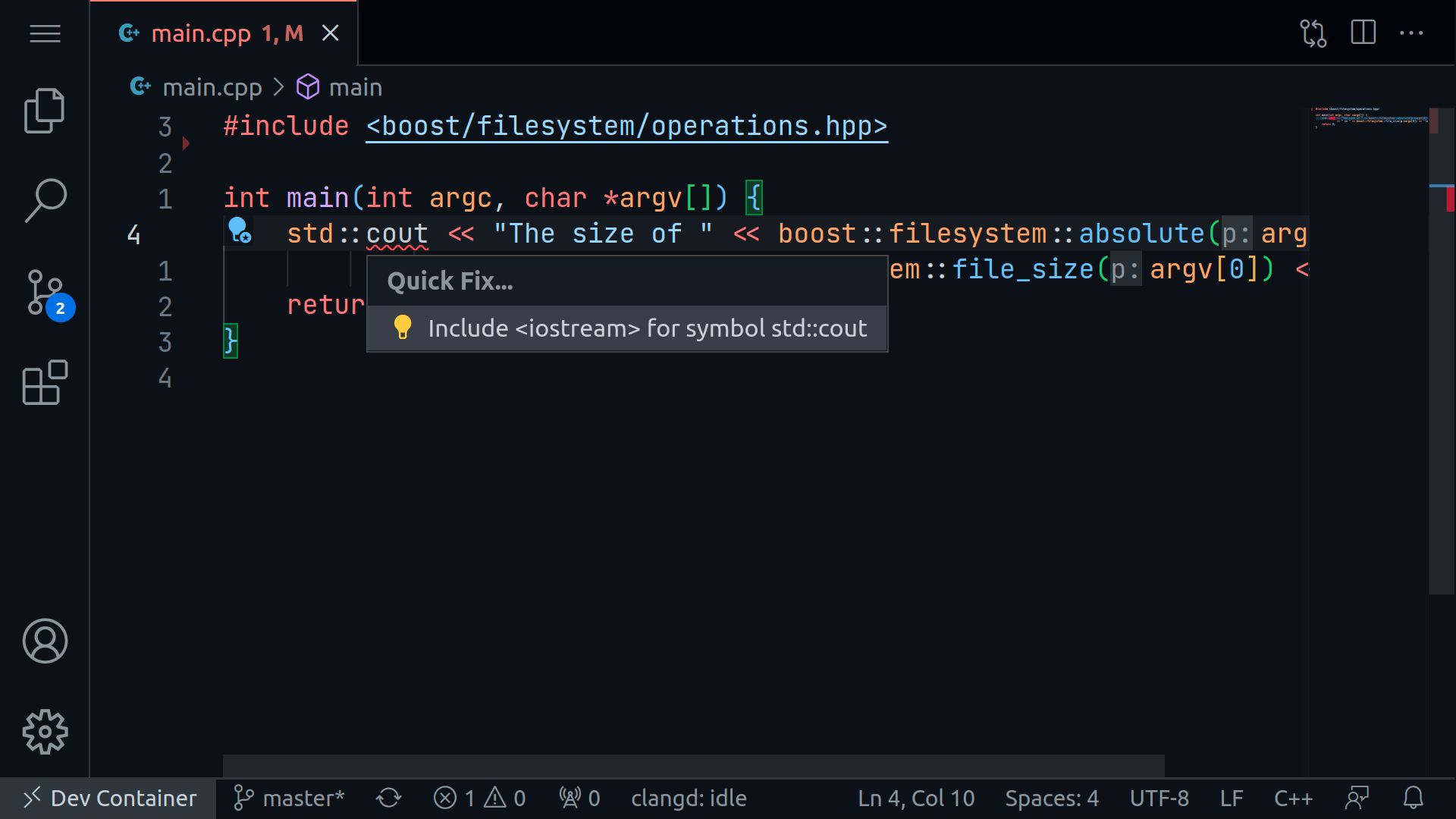 The last noteworthy feature is the support of format based on the .clang-format file.

After critical setup is completed, other valuable extensions can be added to the .devcontainer.json. It might be crucial because once launched in Docker, all the interaction with source code is done from within a container, i.e., if a user uses any plugins for editing file types other than C++ within their project, it is recommended to add the corresponding plugins to the .devcontainer.json file.

For example, CMake files are not highlighted properly; this is remedied by installing the CMake plugin in the container, as shown in the picture below: 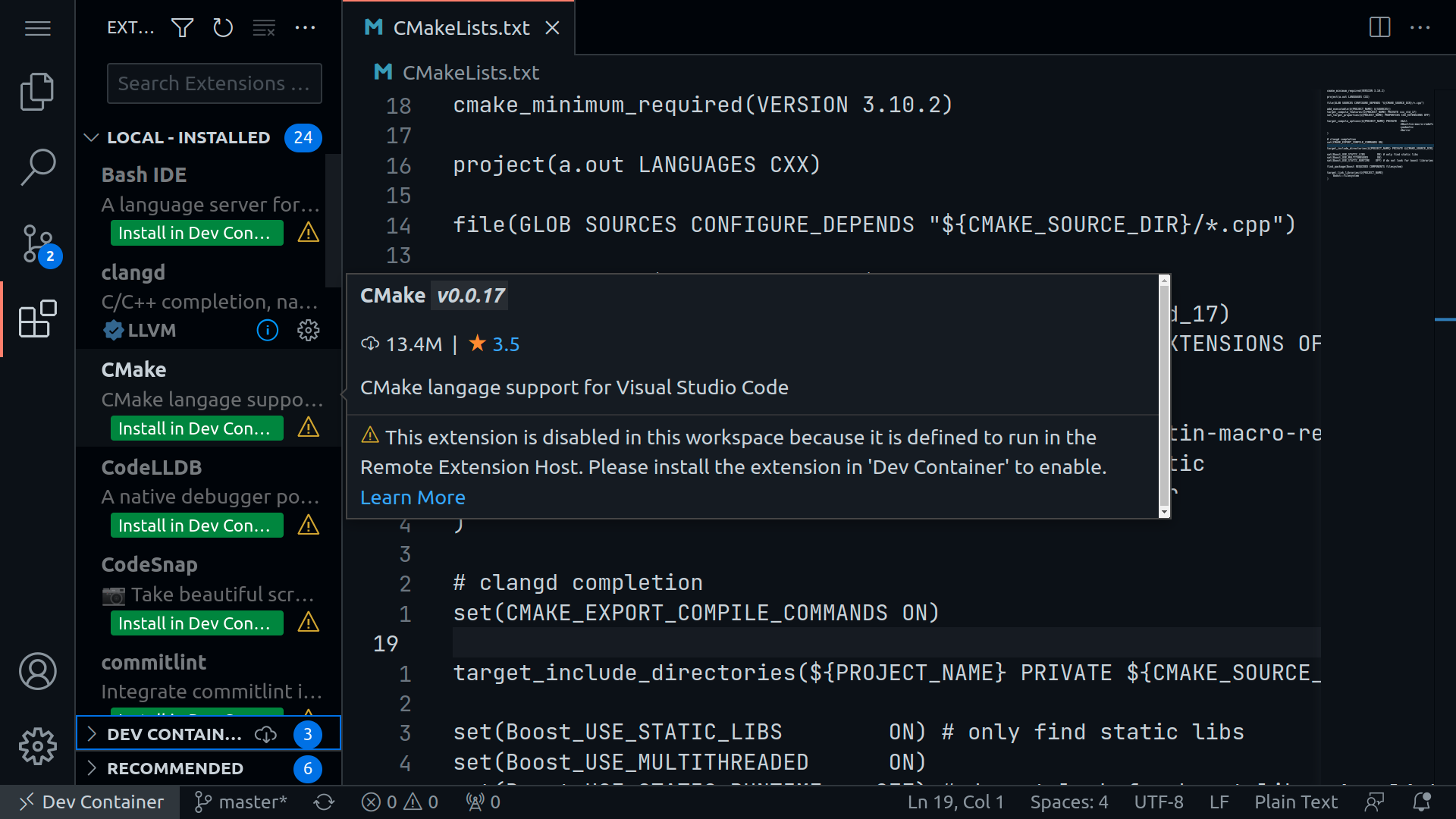 After the plugin is installed, I suggest adding it to the .devcontainer.json file either manually or via the UI so that the next time the container is launched, the extension will be installed automatically: 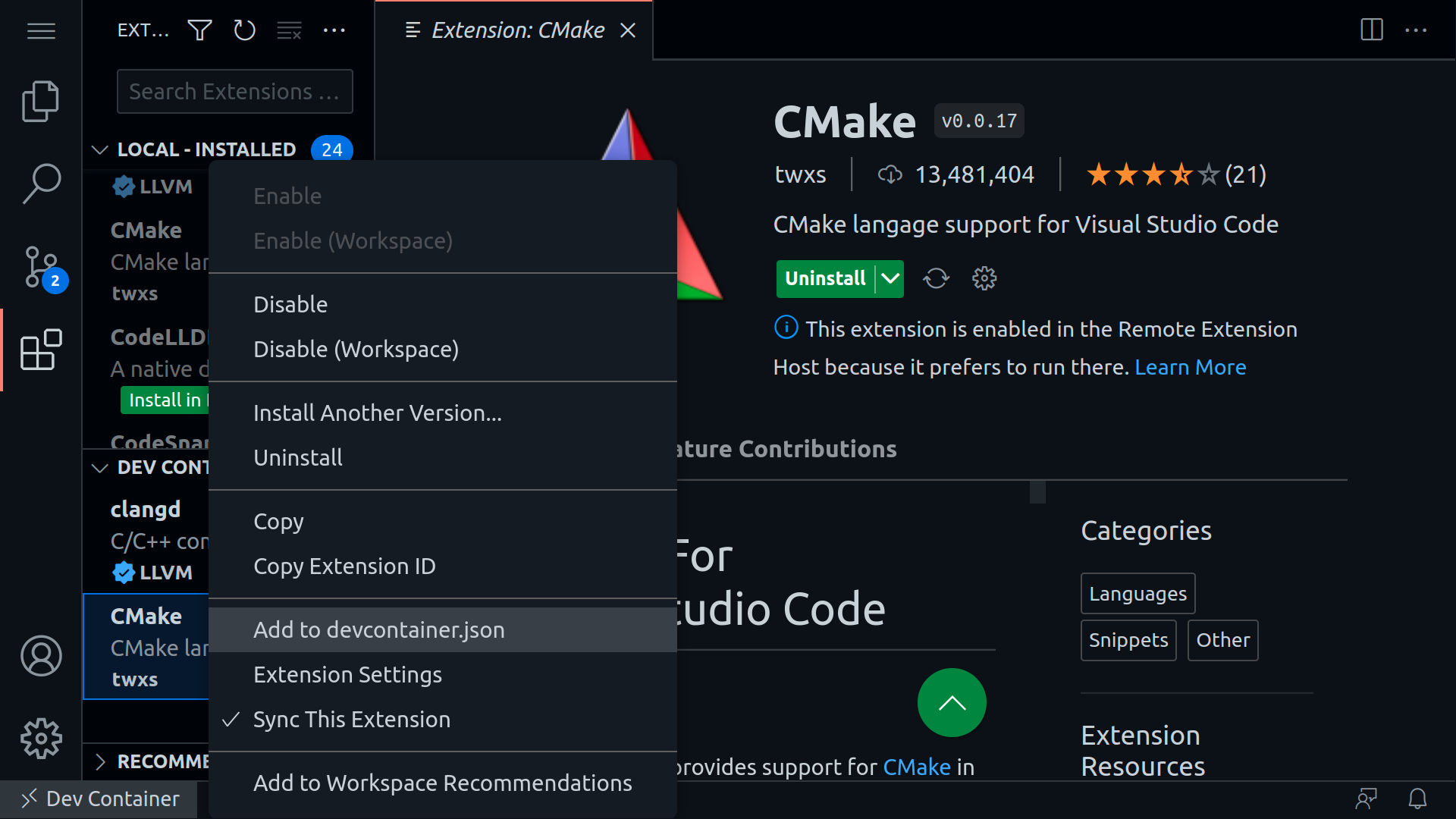 Besides those mentioned, my setup usually includes various plugins, depending on the project: Python plugin(s), Grammarly (checks grammar in text and markdown files), Git Lens, markdown linter, and others.

Some users might find the CodeLLDB extension useful, which provides a native debugger powered by LLDB to debug C++, Rust, and other compiled languages.

For complete information regarding the configurations available for the .devcontainer.json file, please refer to the official page.

As usual, the example project on Github is updated with the docker configuration described in this post.

Special thanks to Rina Volovich for editing.